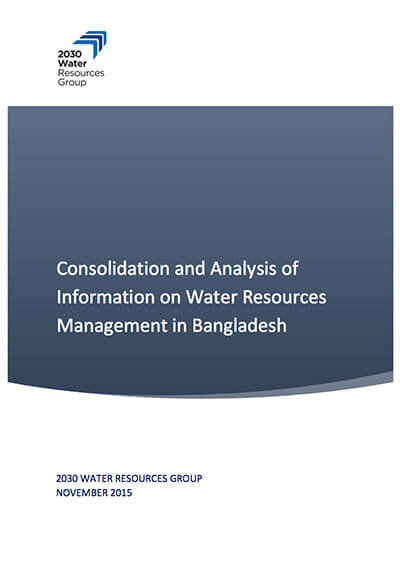 The 2030 WRG commissioned PwC and BCAS to consolidate and analyze information on water resources management in Bangladesh. The first objective of the analysis was to identify key water resources challenges and priorities today and in 2030. The second objective was to raise awareness and to mobilize and engage new actors from the private sector and civil society to take steps toward sustainably managing water resources. Existing data sources and secondary literature were assessed and consolidated to ensure that the analysis is based on solid data. Building on this analysis, stakeholder consultations were held to identify stakeholder-specific challenges to sustainable water management, as well as to identify existing and potential business cases that
promote sustainable water management. Finally, recommendations were made to support Bangladesh in moving toward sustainable water management. 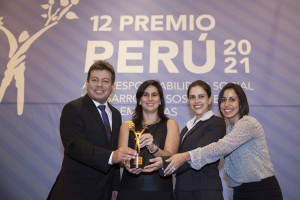 The company is based in Lima and provides natural gas fired power generation services and operates as a subsidiary of AEI Services LLC. The company won the award for their million dollar investment in a desalination and water treatment plant based in the Municipality of Chilca. The plant now delivers 2,000 m3 drinking water, 24 hours daily at no cost to the 15,000 inhabitants and surrounding villages. Before the investment, access to drinking water supply was limited, and available only for 2 hours a day at irregular intervals.

Peru 2021 represents the World Business Council for Sustainable Development in Peru and is a member of Forum Empresa, an alliance of business organizations that promotes the development of social responsibility in the Americas. The association’s board includes 100 of the largest companies in the country.

WHILE a drought is threatening SA and there is growing demand for water and a diminishing capacity to supply it, the real issue now is the worsening quality, experts say. The Council for Scientific and Industrial Research (CSIR) believes that quality, rather than quantity, is the big issue and warns that an increase in population and economic growth could result in serious water shortages by 2025.

CSIR water resource competence area manager Harrison Pienaar says the water crisis “is not a debate” — increasing quality problems are underlined by the already inadequate supply of clean water in certain parts of the country “to meet the needs of citizens, agriculture and industry, or to sustain the country’s ecological baseline”.

He says Gauteng spends between R50m and R100m a year on infrastructure maintenance, but “this is not enough to cover one-third of the cost required for maintenance, let alone refurbishments”.

The Department of Water and Environmental Affairs has proposed a strategy of reducing water demand by 15%, but the likelihood is that usage will fall by just 1% a year — “meaning that the required savings will only be realised in 15 years’ time”, says Herold.

SABMiller head of sustainable development Andre Fourie says SA is heading for a major usable water crisis within 10 years if the situation is not brought under control.

“We’re one drought away from a major crisis,” he says.

“SA is possibly the world’s most water-stressed country and yet we’re wasting water, we’re not caring for it and we’re not pricing it correctly. It’s important that the public and private sectors get together and look for sensible solutions.”

With the province’s population increasing by 300,000 people a year, water infrastructure — such as canals, pipelines, stormwater drainage systems and dams — should be scaled up sooner rather than later.

Mayathula-Khoza says rainwater harvesting should be increased, as well as the desalination of acid mine drainage. “We need private sector investment as these projects are investment-ready,” she says.

“The government has fewer resources available for infrastructure and is keen to avoid the debt trap. We need new ways of financing our infrastructure programme through public-private partnerships, new development finance institutions such as the Brics New Development Bank and politically effective user-pays systems. There needs to be a new mood of co-operation.”

Zama Siqalaba, programme manager for the Nepad Business Foundation’s Strategic Water Partners Network, says the municipal sector experiences water losses and non-revenue for water of about 36.8% of total use — amounting to about R7.2bn a year — highlighting the need for better management of available resources.

“SA is world-renowned for its excellent water legislation, which indicates that it’s not thought we lack. It is coherent planning, implementation, compliance monitoring and enforcement we struggle with,” he says.

SIQALABA believes a multipronged approach is required to develop tariffs that are better matched to the real cost of water production, which would lead to improved leak repair, pressure management, education and awareness.

“In the mining sector, we need to rethink the notion of mine water as a liability and start looking at it as a potential resource. This requires strong policy related to the treatment of mine water to potable standards for sale to municipalities or to a lesser standard for agricultural use and the rules of engagement between the public and private sector in this regard,” Siqalaba says.

Many companies are increasingly factoring in water as a crucial business risk — “and they should”, he adds. The network recognises that water is the number one risk to the future of business worldwide.

The plight of the rickety water infrastructure platforms, especially when taken together with similar shortcomings in the energy and transport sectors, “is a serious deterrent to foreign investment”, says the chairman of Japan’s Chamber of Commerce and Industries in SA, Sachio Kaneki. “They are SA’s most urgent priorities. Get them right and more Japanese investment will follow.”

He says Japanese firms have the technology, funding and experience to assist SA in dealing with infrastructure backlogs.

“And Japanese firms are willing and eager to pursue public-private partnerships,” he adds.

Companies in SA have a hoard of R500bn on tap and the best access to what is left of SA’s bank of skills, especially in the fields of infrastructure development. However, the government and the private sector don’t trust each other and that gets in the way of forging partnerships.

THIS need not necessarily be the case, says Jeff Immelt, CEO of General Electric (GE), the world’s biggest infrastructure company. He says public-private partnerships are the best solution to get things moving, as long as both understand their roles and that the key lies in long-term value commitment.

“If you’re going to do a big public-private partnership project, the partners have to sign up to a 20-year commitment, and we would insist on the deal including a local private partner,” he says.

Immelt says GE wants to play a bigger role in SA’s infrastructure development, including getting involved in funding. He maintains that there is plenty of cheap capital looking for a home.

“If the US Treasury rate is (almost flat) and you can finance a 20-year infrastructure project that has a long-term sovereign or big corporate-backed purchase price agreement earning 4%-6%, that’s a good trade. You will find capital for projects like that,” he says.

The biggest culprit in the despoliation of water is the government, says the lobby group AfriForum.

“The government is discharging approximately 1.6bn litres a day of sewage effluent that does not comply with safety standards into our rivers and dams.

“That means 74% of waste water treatment facilities are unlawfully polluting our water, which is criminal,” says AfriForum’s head of environmental affairs Julius Kleynhans.

Some fear it may take a dam failure to bring home the importance of infrastructure development and maintenance.

The Department of Water and Sanitation’s dam safety office says in its latest annual report that only 60% of its category I and category II dams comply with basic dam safety standards, while some category III dams — the largest — are also a cause for concern.

SA is possibly the world’s most water-stressed country and yet we’re wasting water, we’re not caring for it and we’re not pricing it correctly. It’s important that the public and private sectors get together and look for sensible solutions.