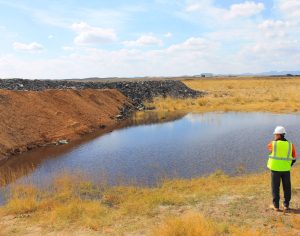 Ulaanbaatar, Mongolia, February 4, 2016 – The 2030 WRG in a consortium with IFC and partners, successfully brokered a new voluntary code of practice (VCP) for common water management and reporting for the mining industry in the South Gobi region. This collective effort will safeguard water resources and promote the efficient and transparent use of water. The VCP is a critical step towards building trust among local stakeholders, including government authorities, local communities, civil society organizations, and the media. Other partners include the Government of Canada, Australian Aid, the European Bank for Reconstruction and Development and the International Council of Mining and Metals.

Mining is the backbone of Mongolia’s economy. The arid Gobi region is set to experience a major mining boom. However, lack of long-term management and resolution of water issues could derail mining and significantly impact the country’s future growth. Exploration and mining companies need water for operations and are increasingly aware that it needs to be managed as a shared resource.

A statement issued by the VCP’s signatories signed says, “The VCP is a powerful display of corporate accountability. It is necessary to balance mining sector development with the human need for water in the Gobi region. We have made a statement of intent; now we have to deliver on it.”

“The VCP provides the framework for a positive impact on water management by conserving ecosystems, strengthening communities, and committing to specific operational practices,” said B. Byambasaikhan, CEO, Erdenes Mongol, Mongolia’s largest investment holding company and one of the signatories to the VCP.

“In Mongolia, water is a shared resource requiring common awareness and joint management approaches,” said Tuyen D. Nguyen, Resident Representative for IFC in Mongolia. “The mining industry’s comittment to the VCP shows its willingness to take a sector-wide approach to address a national challenge.”

IFC has engaged the mining sector in the South Gobi (SG) region since 2013 with the overall goal of improving the water management and stakeholder engagement practices. IFC and the South Gobi Water and Mining Industry Roundtable  worked together with over ten companies to developthe VCP, which is based on leading international practices on community engagement, participatory water management, and monitoring.