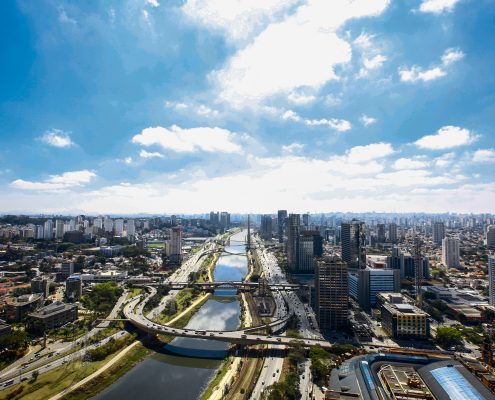 On March 20, 2017, the 2030 Water Resources Group (2030 WRG) organized the first meetings of the São Paulo Working Groups, which focused on (1) Water Demand Management, Reuse and Recycling; and (2) Sustainable Financing of Water Infrastructure.

The Metropolitan Region of São Paulo (MRSP) — the seventh most populous urban area in the world – includes the city of São Paulo and 38 other municipalities, where more than 20 million people live and generate between 20 to 30% of the Brazilian GDP. São Paulo was affected by an unprecedented drought during 2014 and 2015, one of the greatest water crisis in Latin America. The government of São Paulo and Sabesp (the publicly traded water and waste management company owned by São Paulo state) have invested heavily in wastewater treatment in recent years, and implemented innovative programs, but the persistent drought during 2014-2015 exposed São Paulo to a critical situation with severe economic and social impacts.

Given this background, the 2030 WRG was invited to support the development of multi-stakeholder platforms in São Paulo that can propose solutions to the local water challenges. In May 2016, 2030 WRG and World Bank staff, accompanied by a senior Brazilian consultant, traveled to São Paulo and met with stakeholders from government, private sector and civil society to determine if there was demand for a 2030WRG engagement. The meetings received positive feedback, helped identify the main challenges and opportunities of the water sector locally, and indicated that the 2030WRG approach (Analyze – Convene – Transform) could be most suitable.

An Introductory Workshop was then organized in November 2016 to discuss the main themes that had emerged from the May interviews. During the Workshop, representatives from the state government of São Paulo, private sector leaders, civil society and academia explored the challenges and opportunities in water resources management in São Paulo. The Government of the State of São Paulo was represented by the State Secretary of Sanitation and Water Resources and President of the World Water Council, Dr. Benedito Braga, and the Deputy Secretary of Sanitation and Water Resources, Dr. Monica Porto.

The workshop was hosted by Dow Chemical Company at its auditorium in São Paulo and was attended by approximately 40 senior delegates. The conclusions of the scoping mission held in May 2016 were presented during the workshop and 3 potential areas of work were discussed: (1) Water demand management, including water reuse and recycling; (2) Sustainable financing of water infrastructure (3) Economic/insurance support for water security, to manage risks. The first two working groups had strong participation and it was noted that they could quickly be operational as Thematic Groups in São Paulo State.

The Working Groups met recently, on March 20, 2017, focusing on (1) Water Demand Management, Reuse and Recycling; and (2) Sustainable Financing of Water Infrastructure. The day started with welcome remarks from Monica Porto, Deputy Secretary of Sanitation and Water Resources for the State of São Paulo, who reiterated the Secretariat’s strong support to the work proposed by the 2030 WRG and also confirmed the importance of the proposed themes to São Paulo. Each Working Group engaged very quickly in the analysis of the themes, identified opportunities for studies and projects, and was able to develop an action plan for the next few months.

These meetings were held at the Law School of the Fundação Getúlio Vargas (FGV), supported by their Infrastructure and Economic Solutions Working Group. A total of 46 participants from the state government, the private sector, industry associations, academia and civil society joined these discussions.