2030 WRG presentation on the occasion of the United Nations General Assembly
High-Level Interactive Dialogue
“the International Decade for Action, ‘Water for Life” 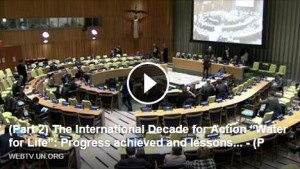 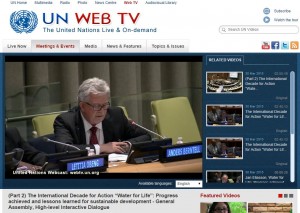 View the recording of the presentation

View the agenda and background information for the event

Your Excellences, Ladies and Gentlemen,

The World Economic Forum in their annual Global Risk Report, building on the expert opinion of some 1000 international experts, leaders of companies and international organizations, has for five years ranked water among the top five Global Risks. This year it is ranked as number 1. Similarly the CDP Water Disclosure Report has over the last years reported on an increasing number of companies that share this belief. In the 2014 report 68% of the companies (all of them are amongst the Global 500 companies) reported that water poses a substantive risk to their business, and 22% reported that issues around water could limit the growth of their business.

It is clear that water availability and/or water quality poses a real risk not only to people and ecosystems, but also to countries and their economies.

Growth is thirsty, and all production has a water footprint, 130 liters of water was required to grow the beans that produce one cup of coffee. My total water footprint for food only, as an average US/European citizen, is probably above 4000 liter per day, because of all the meat and dairy products I use. A vegetarian Indian or a Chinese with less meat in the diet has a footprint of about 2 000 liter. But not only food has a water footprint, any production of any goods requires water.

The growing number of people in the world increases demand for food, commercial goods, energy and water. Changing patterns of consumption – not just the growing head count – creates demand for more water. To provide the energy and quality of food that people need and want to make a better life, particularly in developing countries, there are shifts to more water-intensive production methods; grain-fed meat, for example, is now part of the food chain in developing countries as well as developed markets.

The Global Risk Report acknowledged that concerns over a looming water resource crisis reflect the fact that “past warnings of potential environmental catastrophes have begun to be borne out, yet insufficient progress has been made.”

Global water requirements are projected to be pushed beyond sustainable water supplies by 40 percent by 2030 in a business as usual scenario. A big component of this is increased agricultural water needs.

Agriculture already accounts for 70 percent of total average water consumption worldwide. By 2030, food production will have to increase by 50 percent to meet needs of a growing population and dietary changes, with a potential increase of water demand of the same size, unless we produce that food more water efficient.

The International Energy Agency further projects water consumption to meet the needs of energy generation and production to increase by 85 percent by 2035.

A recent report by IFPRI (International Food Policy Research Institute), found that 4.8 billion people – more than half the world’s population – and approximately half of global grain production will be at risk due to water stress by 2050 if status quo/business-as-usual behavior is followed.

The IFPRI study also found that 45% of total GDP ($63 trillion) will be at risk due to water stress by 2050. That’s 1.5 times the size of today’s entire global economy.

The nexus of food, water, energy and climate change is “one of four overarching mega trends that will shape the world in 2030,” and these risks are further related to other risks like large-scale involuntary migration, according to the Global Risk Report.

And we know that water scarcity and water pollution is already today affecting economies in many countries.

We see investments being stopped because the investors are not sure that the water that is needed for the operation of the production is guaranteed. Examples are found in agriculture and hydropower in Africa, mining in Peru and coal power plants in China, amongst others. Other examples are found where water quality becomes an issue not only for people and ecosystems, but for the requirements of industry itself such as the textile industry in Bangladesh, and other industries in China and India.

And we also know the effects of lack unsafe drinking water and inappropriate sanitation has on people’s health, and thereby also on the economic development of countries.

The 2030WRG is a Public-Private-Civil Society initiative. We were founded on the understanding that the challenges ahead of us are too big, and too complex, for anyone to resolve if working on their own. We need to join hands and work together across sectors (agriculture, energy, water, industry, financing etc) and also across the divide between public, private and civil society actors.

We were established, couple of years ago, by a few global companies, food and beverage, (Nestle, PepsiCo, and the Coca Cola Company) but many more companies have joined our work in the countries where we operate. Bilateral donors such as Sweden and Switzerland and IFC (World Bank Group) were also among the founding partners, but also others are supporting our work in different countries such as Germany, USA, AfDB and IDB. Many other organizations are working closely with and supporting us such as UNDP, GWP, WWF GGGI and others.

The reason why we were established is beyond the direct self-interest of the companies involved, and the concern for their own production/manufacturing of products.

We were established because these companies were concerned about what water scarcity, and other challenges such as water quality, will do to the development and the economy of countries where they operate. One can describe it as a long term, enlightened, self-interest of the companies. They depend on countries where the economy is growing, where development is not jeopardized because of lack of water and where people’s livelihoods is improving.

In the countries where we work, we create a platform where the government in that country can sit down with the water using private sector from that country and the civil society, and discuss together what needs to be done to address the water challenges they are facing, and how they can do that by working together.

We call these platforms “Multistakeholder platforms”, and the objective is to facilitate and stimulate collective action for improved management of the water resources and reduced demand by using the water more efficiently. In the countries we have worked, we have been able to show how effective and powerful this approach can be, such as in Mexico and Peru, South Africa, Kenya and Tanzania, India (including in the states of Maharashtra and Karnataka) Bangladesh and Mongolia.

We are convinced that this approach, by making the various stakeholders work together to develop concrete solutions to the challenges they are facing, is a very effective way to reduce the risk of water scarcity in their country.