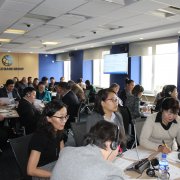 By spearheading the development of standards based on best practices of wastewater treatment, recycling, and reuse, Mongolia 2030 WRG partnership provided the Government of Mongolia with a critical tool to implement key national priorities and policies, including the national water program and the policy on Green Development.

The 2030 WRG program in Mongolia is currently developing two projects—one in Ulaanbaatar, where many factories are located, and the other in the South Gobi Desert, which is the heart of Mongolia’s mining industry—to support the implementation of the recently-approved standards on wastewater reuse. The projects will demonstrate the benefits of adopting the new standards and inspire more widespread adoption by the private sector.

Although the Mongolian government introduced several laws and guidelines targeted at preserving water resources through integrated water resources management, such regulations were ineffective in curbing water pollution and promoting wastewater treatment and reuse. Implementation of wastewater reuse was also weak due to an underdeveloped legislative environment and the lack of knowledge in global best practices.

It was against this backdrop that the Mongolia 2030 WRG team initiated a workstream, with the help of the Government of Mongolia, to improve the legal environment for wastewater treatment and reuse in Mongolia. The team’s goal was to develop draft standards for treated wastewater reuse based on international best practices.

This was an ambitious goal given the fact that developing each standard for any given water reuse application requires an iterative process that involves careful review of existing and proposed standards in Mongolia, and consultations with various stakeholders, including the Ministry of Environment and Tourism, large industrial units, industry associations, and civil society. These steps are followed by the identification of water quality parameters relevant for industrial wastewater (effluent). Only then would a draft standard be prepared. The draft standard would then be made available to relevant stakeholders in the public and private sectors, as well as in civil society for their feedback. Finally, the draft would have be officially submitted to the government at two levels, namely the Mongolian Technical Committee of Environmental Standards and the Mongolian Technical Committee of Standardization and Measurement.