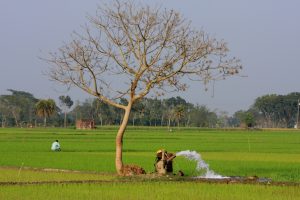 Dhaka – Understanding water scarcity in the Bangladesh context is deeply related to the estimation of the value of water in a particular season, region and use. A comprehensive but flexible framework for Water Valuation for industry, agriculture, municipalities and environmental would be an important element of making approval decisions on Water Resource projects, water allocation among competing uses and establishing water trading markets (a market mechanism to allocate water to most productive uses). Sound methodologies to valuing water can provide decision support tools to policy makers, help harmonize practices at the factory and farm levels, provide a rational basis to resolve conflicts and to set incentives. As Bangladesh lacks such instruments, the 2030 WRG Bangladesh Water MSP decided to prioritize design and adoption of Water Valuation methodologies.

2030 WRG developed preliminary recommendations (Working Paper) to implement Water Valuation in Bangladesh under the Water Governance and Sustainability work-stream, chaired by the Senior Secretary of Ministry of Water Resources which was subsequently endorsed by the high-level National Steering Board (NSB) chaired by the Cabinet Secretary. The Working Paper included the principles and factors that need to be considered for adopting Water Valuation methodologies for the different sectors such as industry or agriculture and international best practices in this area. The NSB recommended further work to arrive at a set of methodologies for Water Valuation for Bangladesh.

Internationally, Water Valuation is also a priority and has been designated as a major topic at the High-Level Panel on Water (HLPW) along with Climate Change, Water Data and Water Use Efficiency. The HLPW was formed with the support of the UN and World Bank to accelerate a change in the way governments, societies, and the private sector use and manage water. The HLPW has created the roadmap and principles for applying Water Valuation, including for economies, ecosystems, communities, individuals, political environments (politicians/lawmakers), cultures, and religions. Going forward, the HLPW will finalize the recommendations through an inclusive, consultation-driven process and highly encourages country level initiatives which conforms with the framework developed internationally at the HLPW.

In July 2017, the government of Bangladesh invited 2030 WRG to make presentations on its Water Valuation work at the Dhaka Water Conference (including a High-Level Panel for Water Sherpa side-event).  The events brought together the relevant government representatives, experts and scientific community from 28 countries from around the world. 2030 WRG’s presentations on Water Valuation and the subsequent discussions were widely appreciated by the participants and seen as an example of implementing recommendations from the HLPW.  Interesting synergies between the work done on the global level by the HLPW and 2030 WRG’s work on water valuation in Bangladesh have emerged, these will feed into the 2030 WRG process.

Going forward, 2030 WRG will develop a Project Proposal including detailed Water Valuation methodologies and implementation guidelines and support a series of sectoral and national workshops, from October to December 2017 to solicit feedback into the White Paper. Once, the Proposal is adopted by the National Steering Board, the government of Bangladesh will be able to take measures to implement the methodologies.