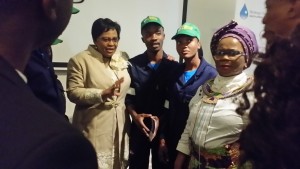 May 11, 2016 – The South Africa Strategic Water Partners Network (SWPN) recently hosted the ministerial budget vote networking and private sector feedback session. This session was attended by the the South African Minister, Deputy Minister and Director-General of South Africa’s Department of Water and Sanitation DWS ) amongst other participants and chaired by Zama Siqalaba, SWPN Program Coordinator. Nandha Govender also attended to support the event on behalf of the SWPN Manco.

Zama Siqalaba chaired the event on behalf of the SWPN and gave a brief overview of the network. Very concise and positive reflections were given by varying sector representatives with which the SWPN could strengthen partnerships and make new connections.

As stipulated in the program, the presenters included the NBI, Microsoft, WWF, CSIR, WRC, Green Youth Indaba, Mr Lulu Johnson (Chairperson of the Water and Sanitation Portfolio in parliament) and last but not least comments and closing remarks from the Deputy Minister and Minister. The SWPN also got an opportunity to make some remarks on the budget speech before the closing remarks from the principles.

The Minister and Deputy Minister spoke passionately about the huge role that private sector can play in the following areas:

In their closing remarks, both the Minister and the Deputy Minister publicly acknowledged the SWPN and its partnership with the Department. The Minister stated the SWPN remains the best public private partnership platform in the world and encouraged all stakeholders to come on board and join the SWPN to increase the private sector partnership with government. The event was a great platform to engage the water boards and high profile leaders in the water sector. The contacts made with the parliamentary members can only strengthen the partnership between private sector and government and we hope to capitalize on these engagements for other upcoming events such as the SWPN water stewardship event to grow the water family which is high on the Minister’s agenda.