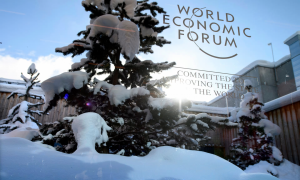 Davos, Switzerland, 17 January, 2017 –  The 2030 WRG Governing Council met in Davos, Switzerland during the World Economic Forum Annual Meetings. The members discussed 2016 results and prepared for the next strategic plan.

Chairman Peter Brabeck-Letmathe reiterated the world’s joint resolve to implement the SDGs, and to take a stance on tackling climate change with a key emphasis on water and adaptation. He reflected on the development of the 2030 WRG, from the first meeting in Davos with just 10 people in the room, to the broad network that it represents today.

The number of partners connected to the network has increased to 500 partners in over 11 countries/states, 40% of which are private sector companies.

The council members expressed their deep concern about the fact that what has been achieved globally to counter the water crisis has not been very efficient so far. The ten percent water demand-supply deficit back in 2009, has grown to 30 and could be 40 percent in 2030, as earlier predicted. This means that we are indeed on track, but rather to achieve what we did not want to achieve. The World Economic Forum’s Global Risk Report has put water at the top for three consecutive years. Even though there is increased awareness now, we are still far from finding sustainable solutions.

2030 WRG Executive Director, Anders Berntell, presented the progress, achievements and results from 2016 specifically showcasing how the work contributes to the SDGs and addresses effects of climate change on water; how we foster partnerships in countries where they did not exist earlier, often with very high level participation from Government, Private Sector and Civil Society and overall results from the country multi-stakeholder platforms.

In 2016 we have joined together 505 partners in 36 working groups in 11 countries/states, and in 2 new countries we have already begun work. Together we have decided on 53 priority areas, which led to the development of 57 concept notes to concretize those areas. 43 proposals have been developed, preparatory arrangements for 35 of these proposals have been set up, and for 14 of these programs we have seen the full implementation on the ground.

Fruitful discussions were held around the issue of scaling up, maintaining quality and ensuring inclusivity, continuity and sustainability of the 2030 WRG programs. The partners with local presence in the 2030 WRG countries of engagement, have offered their partnership and assistance on the ground to further develop the programs.

The 2030WRG has now reached the end of the five-year hosting period within IFC and will be transitioning to a more ambitious phase. The council members present agreed with the development of the long term 6-year plan (2017 – 2023) with an evaluation cycle in the 3rd year. The Council members were satisfied with the way that 2030 WRG has been able to build and institutionalize effective and committed partnerships in the countries where it is active. They expressed their organization’s continued commitment and support, and wanted to see the program continue its work.