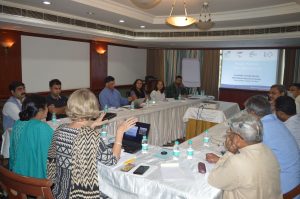 On October 20, 2016, about 25 representatives from local NGOs, private sector and academia came together in Meerut to discuss how to step up efforts to revive the Hindon River Basin. People traveled from the entire river basin area, ranging from Saharanpur to Ghaziabad. They decided to form a so-called Hindon River Council to strengthen collaboration across different stakeholder groups and administrative borders.

The need was felt to capitalize on a basin-wide information sharing and knowledge exchange process initiated by the 2030 Water Resources Group and its partners in June 2016. Through the co-called Hindon Yatra Exhibition & Symposium series, a momentum has been generated to replicate and scale up actions which were already happening on the ground. As a result of the Hindon Yatra events about 15 tangible project proposals have been developed for a basin-wide “Vision to Action” Plan. The plan includes committed initiatives from community, industry, research and local administration to rejuvenate the Hindon river basin.

The River Council will continue to build a pipeline of projects and ensure implementation on the ground in the next years. Cleaning up the entire basin will take at least until 2030 – if sufficient funds can be allocated and assuming that government, stakeholders and citizens would join forces. Another task of the Council will be to provide a feedback loop into the formal government process which is anchored in the Hindon Committee, chaired by Divisional Commissioners of Meerut and Saharanpur.

“India Water Partnership has agreed to function as Secretariat of the Hindon River Council. We will be happy to strengthen project implementation and would gladly continue to support the Council’s members with our knowledge and expertise“, said Dr. Veena Khanduri, Executive Secretary to India Water Partnership. The first constitutive River Basin Council meeting will be hosted in Ghaziabad on Saturday 10th of December 2016.