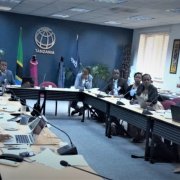 Dar Es Salaam, Tanzania – The Tanzania 2030 Water Resources Group convened senior representatives from Tanzania’s agriculture, finance, and water sectors  to chart a path forward to make it easier for the country’s smallholder and emerging farmers to access financing for irrigation technologies. The move aims to improve irrigation efficiency while also expanding the amount of land under irrigation.

The collaboration supports the mandate of NIrC to strengthen private sector engagement in irrigation through financing, equipment-supply, and co-investment.

Eliakim Chitutu, NIrC’s Managing Director said: “If Tanzania is to achieve its agriculture and food security targets, expanding irrigation is critical, but we must do so in a way that is both financially and environmentally sustainable.”

Smallholder and emerging farmers account for over 80 percent of the nation’s agriculturalists and they struggle to access credit and loan mechanisms that would enable them to purchase modern, water-efficient irrigation systems. As a result, although Tanzania is endowed with nearly 30 million hectares of irrigable land, less than 500,000 hectares is currently under irrigation, equivalent to less than 2 percent of the potential.

Despite the limited amount of land under irrigation, the agriculture sector remains the country’s largest water user, accounting for over 80 percent of water consumed nationally. Gravity, open canal and flooding or basin irrigation methods commonly in use are very water-inefficient, with up to 45 percent water losses. Despite a relative abundance of water resources, critical parts of Tanzania, the Pangani River Basin in particular, are considered water-stressed. Freshwater availability per capita in the latter is 1,200 cubic meters, compared to 1,608 cubic meters for Tanzania as a whole. The water-efficiency of irrigation solutions is therefore critical to safeguard Tanzania’s future water security.

“Tanzania’s smallholder farmers produce the majority of agricultural output, but they also struggle to access affordable credits and related services,” said TAHA CEO Jacqueline Mkindi. “The challenge is not only about lack of financial products in the market but also weak support system to guide farmers on how to access available credit in a smart manner.”

A market study carried out in 2016 by TADB, Tanzania 2030 WRG, and FSDT found that although the country’s banks have developed products aimed at supporting such farmers, the high costs of capital and of identifying investment-ready farmers increases the risks to extending irrigation financing on a large scale.

“Qualified demand for irrigation is dispersed and uncharted. Such conditions, combined with the relative disconnect between target farmers and financial institutions, make identifying bankable irrigation projects challenging” said Japhet Justine, Managing Director for TADB, “That’s precisely the challenge that this partnership is intended to address.”

The consortium will identify, prioritize, incubate, and package irrigation financing opportunities that meet the requirements of funding sources, therefore reducing the coordination burden on financiers.

By facilitating smallholder and emerging farmers’ access to irrigation finance, the consortium will help to expand the amount of land under irrigation, helping to provide both a safeguard against the worst impacts of climate change while at the same time catalyzing economic growth, improving food security, and safeguarding Tanzania’s future water security.

Speaking ahead of the event, Onesmo Sigalla, Country Coordinator with Tanzania 2030 WRG said: “Water security and food security in Tanzania go hand in hand. The joint-efforts of this consortium are precisely the type of multi-stakeholder cooperation that can leverage sustainable water management as a vehicle for investment and growth, while also helping to safeguard the country’s resources for future generations.”

The Financial Sector Deepening Trust (FSDT) was incorporated in Tanzania on 1 July 2004 with an overall aim to develop a deeper financial system that can provide greater access to finance to more Tanzanians. To unlock greater access, volume, and quality of financial services to the agriculture sector and to rural economies in Tanzania, FSDT is addressing constraints to deeper financial sector engagement in the agriculture sector and tackling the issues contributing to high transaction costs for financial services in agricultural and rural markets.

The National Irrigation Commission (NIC) is mandated for coordination, promotional and regulatory functions in the development of the irrigation sector in the country. NIC in collaboration with various stakeholders, envisages to improve the traditional irrigation schemes and expand the area under irrigation. It is a semi-autonomous Government Department established under section 3 (1) of the National Irrigation Act No. 5 of 2013, under the Ministry responsible for irrigation.

The Private Agricultural Sector Support Trust (PASS) is a facility established in the year 2000 in order to stimulate investment and growth in commercial agriculture and related sectors. It was registered in 2007 as nonprofit making and non-governmental organization under the Trustees Incorporation Act, 2002 and is taxed as charitable organization.

Rikolto in East Africa (formerly VECO/Vredeseilanden) is part of the Rikolto Network, an international NGO with more than 40 years’ experience in partnering with farmer organizations and food chain stakeholders across Africa, Asia, Europe and Latin America. Rikolto runs programs in 15 countries worldwide through eight regional offices. We enable and support smallholders’ farmers to take up their role in rural poverty alleviation and to contribute to feeding a growing world population in a sustainable way.

The Tanzania Agricultural Development Bank Limited (TADB) facilitates the development and transformation of the agriculture sector by providing short, medium- and long-term finance to agriculture projects in Tanzania that promote economic growth, food security and the reduction of income poverty. Our vision is to be a world-class model agriculture development bank that supports and promotes Tanzania’s agriculture transformation from subsistence to commercialized modern farming and agri-business for economic growth and poverty reduction. TADB was established under the Company Act, 2002 CAP 212 in September 2012.

The Tanzania Horticultural Association (TAHA) is an apex private sector member-based organization that advocates for the growth and competitiveness of the horticultural industry in Tanzania. Since its inception in 2004, TAHA has been an effective voicing platform for producers, traders, exporters and processors of the horticultural products mainly; ﬂowers, fruits, vegetables, horticultural seeds, and spices. The Association safeguards the interest of the private sector and ensures the industry issues are well mainstreamed at the national and international agenda.