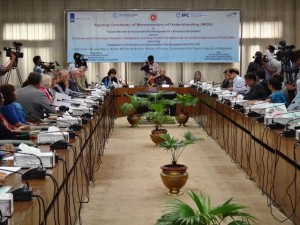 Dhaka, June 16, 2015 – The government of Bangladesh signed an agreement today with the Netherlands and the World Bank Group including its private sector arm, the International Finance Corporation (IFC) with the 2030 Water Resources Group to strengthen management of the Bangladesh Delta, Asia’s largest and the world’s most populated delta. The partnership will help to develop and implement the Bangladesh Delta Plan 2100, a long term and holistic vision for the Bangladesh Delta, and help to realize Bangladesh’s goal of becoming a middle-income country by 2021 while maintaining the unique biodiversity and physical characteristics of the delta.

The Bangladesh Delta planning exercise is to a great extent concerned with water and land resources management but it takes a holistic approach by encompassing other relevant sectors (such as agriculture, industry, transport, energy, etc.), which are critical for economic growth and relevant for environmental management. The Bangladesh Delta Plan (BDP) 2100 will also include the forming of appropriate governance apparatus to facilitate inter-ministerial coordination and a Delta Fund to make investments into delta infrastructure possible. The Delta Fund, once established, will be a block allocation of 2% of the GDP (total GDP estimate by World Bank for 2013 was $150 billion) contributed by not only the government but also the private sector. The 2030 WRG and IFC will work to facilitate and mobilize private capital in the various infrastructure projects related to water resources management under the BDP 2100 partnership. The 2030 WRG will also facilitate inputs from the private sector and civil society to improve the enabling environment for more private sector investments in water infrastructure.

“Bangladesh’s location, high poverty levels and population density makes it especially vulnerable to the impact of climate change and the large economic losses that come with it,” said Johannes Zutt, World Bank Country Director for Bangladesh. “The Delta Plan 2100 seeks to address this very challenge by building greater delta resilience and sustainability to benefit millions of people whose lives and livelihoods depend on this unique environment and to protect it for future generations.” 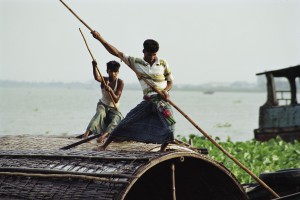 Two-thirds of Bangladesh lies in the Ganges-Brahmaputra-Meghna Delta and calls for special focus to sustainable delta management. Beset by an already high and growing population density along with growing urbanization, proper planning and management of the delta will secure Bangladesh’s future development over the next decades through improving water safety, food security, and disaster resilience.

The partnership among the Government of Bangladesh, the Netherlands and the World Bank Group will facilitate the sharing of knowledge and information among the participating governments and the World Bank Group; identifying and implementing joint activities; and, building on respective expertise and capacity. The agreement builds upon another agreement signed between Bangladesh and the Netherlands in 2012.

“Like all delta countries, Bangladesh and the Netherlands share a common cause to manage these complex environments. They are, therefore, natural partners in the exchange of knowledge and know-how,” said Melanie Schultz van Haegen, Minister of Infrastructure and the Environment of the Netherlands while also stressing the importance of a preventive approach to reduce the risk of disasters.

Lilianne Ploumen, Minister for Foreign Trade and Development Cooperation of the Netherlands, added “the Bangladesh Delta Plan can only be a success if it benefits all people in Bangladeshi society”. She urged in that connection “to give proper attention also to the interests, views and roles of the poor, the landless people and within those groups particularly to women”.

“The partnership and the plan are so vital because meeting the immense water challenges requires resources and commitment from many actors. This plan will unite government, international financial institutions, non-governmental organizations and the private sector in Bangladesh for the benefit of the inhabitants of the delta,” said Anders Berntell, 2030 Water Resources Group Executive Director who signed the MoU on behalf of IFC / 2030 WRG.

The Memorandum of Understanding was signed by Abul Maal Abdul Muhith, Lilianne Ploumen,  Lia Carol Sieghart, and Anders Berntell, on behalf of the Government of Bangladesh, the Government of the Netherlands, the World Bank and IFC/ 2030 WRG respectively at the Economic Relations Division.