Johannesburg – Gauteng municipalities have collectively lost 480 980 000 kilolitres of water in the 2011/12 financial year, amounting to a staggering R7.84 billion in financial losses. 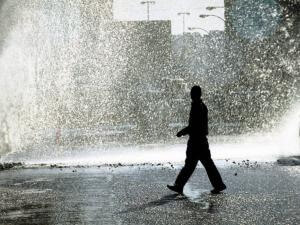 A man walks past a burst water pipe on the corner of
West and Market streets in Joburg. Picture: Mujahid
Safodien

This is according to Gauteng MEC for Local Government and Housing Ntombi Mekgwe, who was responding to a question by DA spokesman on local government Fred Nel.

Mekgwe, in her response to the DA’s written questions, confirmed that the province was experiencing heavy water losses, saying it was mainly due to ageing infrastructure.

She provided the DA with the breakdown of water losses across all municipalities, with the Joburg, Tshwane and Ekurhuleni metropolitan councils found to be the worst offenders.