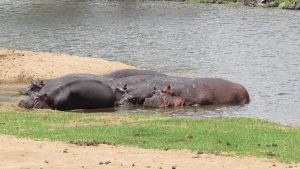 Arusha, 29 January, 2016 – A recent workshop organized by the 2030 WRG took place in Arusha to discuss the concept and gauge potential interest in establishing the Kilimanjaro Water Stewardship Platform. The platform would provide a mechanism to coordinate and scale up interventions and develop solutions to tackle the growing water resources challenges in the basin as part of a wide public, private and civil society partnership. The 2030 Water Resources Group has helped convene a wide range of stakeholders to develop a concept for the Platform.

The Pangani River Basin is of vital importance to Tanzania. It is home to a large number of commercial agriculture producers (coffee and sugar) and has the largest concentration of horticulture and floriculture producers in Tanzania – with over 30 companies in the region identified as exporting to European markets.  The Pangani is also globally recognized for its forest and biodiversity resources which generates an estimated US$50 million alone in revenue each year for the Tanzanian economy.  The Pangani is already water stressed, and evidence suggests its resources will become increasingly constrained.

The objective of the workshop was to bring together important stakeholders in the Basin; to identify priority actions and milestones for the campaign; to strategize a way forward and to highlight the importance of collective action of major water users in the Pangani as being essential to address risks and provide solutions to tackling water challenges in the Basin.

The workshop was attended by more than 30 participants from 20 organizations from the public and private sectors and civil society organizations. At the end of the Workshop, the stakeholders were able to agree on a number of core focus areas and activities and confirmed their agreement on future collective efforts. 16 organizations confirmed their interest in backing the development of the Kilimanjaro Water Stewardship Platform.