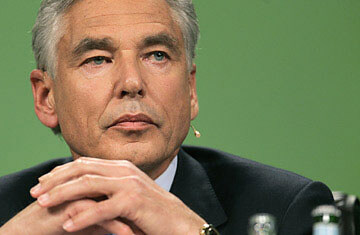 In the 2005 documentary, We Feed the World, then-CEO of Nestlé, the world’s largest
foodstuff corporation, Peter Brabeck-Letmathe, shared some of his own views and ‘wisdom’
about the world and humanity. Brabeck believes that nature is not “good,” that there is nothing to worry about with GMO foods, that profits matter above all else, that people should work more, and that human beings do not have a right to water. Today, he explained, “people believe that everything that comes from Nature is good,” marking a large change in perception, as previously, “we always learnt that Nature could be pitiless.” Humanity, Brabeck stated, “is now in the position of being able to provide some balance to Nature, but in spite of this we have something approaching a shibboleth that everything that comes from Nature is good.” He then referenced the “organic movement” as an example of this thinking, premising that “organic is best.” But rest assured, he corrected, “organic is not best.” In 15 years of GMO food consumption in the United States, “not one single case of illness has occurred.” In spite of this, he noted, “we’re all so uneasy about it in Europe, that something might happen to us.” This view, according to Brabeck, is “hypocrisy more than anything else.”