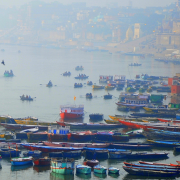 LUCKNOW Wednesday, June 19, 2019 – The Government of Uttar Pradesh launched a unique new initiative on Wednesday to address water issues in the Hindon River, which is a second-level tributary of the River Ganga. The Chief Secretary of the UP Government, Shri Anup Chandra Pandey inaugurated a Multi Stakeholder Platform (MSP) involving Government, private sector, civil society, academia as well as international representatives to catalyze collective action for rejuvenation of this dying river. He acknowledged the need for a participatory approach to tributary governance by saying: “I am positive to see such strong interest of stakeholders to work together to resolve the key water management issues in the Hindon basin.” The Chief Secretary charted the way forward through collaboration between government departments, private and public actors and stakeholder engagement and commended good practices for replication and scale up.

The State Government is committed to a long-term tributary management program which is coordinated under the State Mission for Clean Ganga, because cleaning rivers requires continuous and coordinated action.

At this first Steering Board meeting of this Multi-Stakeholder Platform which has been set up as per Government Order issued in February 2019 with support from 2030 Water Resources Group, key decisions to ensure effective monitoring and to take coordinated actions were taken. Working Groups with public and private co-leadership were formed. International and local experts opined on new approaches, models and technologies to accelerate rejuvenation of the Hindon. The Government of India and Govt of Uttar Pradesh are placing emphasis on rejuvenation of tributaries of River Ganga. Collective action by all stakeholders was identified as key to ensuring sustainable rejuvenation of Hindon river basin.

During the Steering Board meeting, the MSP was officially launched with appointment of the Steering Board, core expert group members, and chairs of Working Groups. The River Basin Management Cycle (RBM) and the Key Water Management Issues were discussed (KWMI). A pathway for the next 6 months with pilot programs for early action were agreed upon. Several synergies were identified and work will commence with collaborative efforts from all the relevant stakeholders. The meeting also led to formalization of working groups under the MSP with representation from GoUP, Private Sector, Civil Society and Academia. Detailed follow-up meetings will be held subsequently. Inputs from this meeting will go towards finalizing a Vision Document for the Hindon Basin and Tributary Management Approach.

The Chief Secretary appreciated 2030 WRG’s efforts to put together the MSP under the guidance of Principal Secretary – Urban Development Department and advised a follow up meeting in 6 months.

The 2030 Water Resources Group aims at supporting Governments in their long-term development and economic growth plans by catalyzing sustainable water sector transformations and accelerating reforms. It is an innovative public-private-civil society platform for collaboration at national/local levels. It mobilizes stakeholders from public and private sector, civil society, centers of academic expertise and financing institutions to engage in fact-based, analytical water security approaches and coalition building for collective action.

In India, 2030 WRG has an ongoing partnership with the State Governments of Karnataka, Maharashtra and Uttar Pradesh, and collaborates with the Ministry of Water Resources of the Government of India. The 2030 WRG was initiated in 2008 by a few leading corporations, development agencies, donors, and civil society organizations. After an incubation phase within the World Economic Forum, it is anchored within the World Bank Group since March 2012.