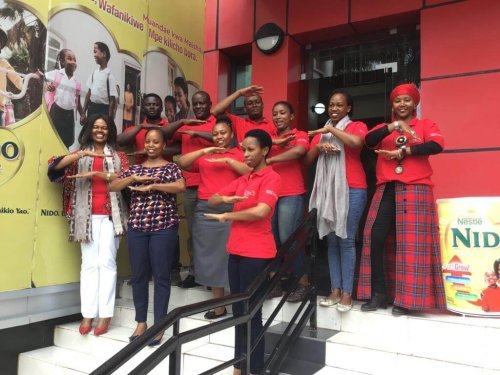 While checking in on partner Nestlé, Neema from the 2030 WRG Tanzania team took the opportunity to co-lead a discussion on women professionals in water management.

A partner visit turned out to be an important meeting on highlighting women as key stakeholders in water management.

It was meant to be a routine partner update visit. I was visiting Nestlé Tanzania’s office in Dar es Salaam to give an update on the progress of the Private Sector working group to Ms. Marsha Macatta-Yambi, Nestle’s Scientific and Regulatory Affairs Manager, and a team of sales and nutrition specialists. Instead, the meeting turned into a discussion about the importance of involving women in water projects and policy planning.

The inspiration for what I shared came from a 2018 article entitled “Women are the secret weapon for better water management” by Ayushi Trivedi, a Gender and Social Equity Research Analyst at the World Resources Institute. In the article, Trivedi gives examples of water projects that have been saved after women were given the opportunity to take a leading role in their management and implementation. While traditionally women have been excluded from decision-making roles, “a growing body of evidence shows that water projects can become more effective when women participate.” The article reports that when women are involved in water committees and provided with training, they can “influence water management” and “their communities get measurably better outcomes – including better-functioning water systems, expanded access and economic and environmental benefits.” A UNDP study referenced in the article, which looked at 44 water projects across Asia and Africa, found that “when both men and women engage in shaping water policies and institutions, communities use water services more and sustain them for longer.”

This is also true in my own experience. In 2009, the Tanzanian government built a community water infrastructure in a neighborhood in Mwanza, a port city on the shore of Lake Victoria, in northern Tanzania. The water user committee in charge of the construction and maintenance of the project involved predominately men. After just six months, the project was failing – water revenues were not being collected, and the project was forced to close due to poor maintenance. Before the project shut down, women from the nearby villages volunteered to take over its management. After three months, the water revenues collections were up-to-date, the water source was in good working order, and once again, the community was able to access clean water.

A dominant perception that a woman’s place is in the home means that their potential contributions to community projects are often overlooked. More effort is required – from the government, NGOs, and their male counterparts – to ensure that women are given an opportunity to participate in projects that target their community.

During the meeting, I welcomed others to share instances they have come across where women’s participation impacted the success of a water project. Many shared stories from their communities, where women have become critical in managing community water and agricultural projects. The common theme across the stories shared was that once women were given the opportunity to participate in decision-making, they were able to provide critical management skills.

The meeting ended with each participant pledging their commitment to women and gender equality. The participants were requested to make true their pledges as they will be required to report them in next year’s International Women’s Day event. My pledge is “to contribute ideas and actions toward addressing women equality in my household and my community, in particular in water-related issues.” What is your pledge?

Neema is the Partnerships Coordinator of the 2030 WRG in Tanzania. Feel free to contact her at nndikumwami@worldbank.org.