Background About Our Work in Karnataka

Karnataka is a state in South West India. Like all states in India, Karnataka has a parliamentary system of government with two democratically elected houses. It is inhabited by 61 million people and covers an area of almost 6% of the total geographical area of India. Its two main river systems are the Krishna and the Kaveri.

As India’s ninth-largest state, contributing 6% of the country’s GDP and registering a growth rate of 8% per annum (Central Statistical Organization, Government of India, and Census of India, 2011), Karnataka is a significant contributor to the national growth agenda. Although the capital of Bengaluru is a global technology hub, farmers make up half of the state’s workforce and agriculture will remain a vital sector for the economy.

With 122 lakh hectares of agriculture land of which 35% is irrigated, Karnataka’s major crops include maize, sugarcane, and pulses. Significant regional and temporal disparities in water availability threaten to constrain food security, industrial growth, ecological security, and livelihood promotion. The prevalent practice of flood irrigation in the agricultural sector and the absence of circular economy solutions for wastewater are leading to sub-optimal utilization of constrained water resources. Wise water management in agriculture will not only benefit farmers, but also the overall development of the state.

With over 430,000 hectares under sugarcane cultivation and a sugar output of 4 million tons, the state of Karnataka accounts for 10% of India’s sugar production (S.Nijalingappa Sugar Institute, CACP report, 2014). However, the prevalent practice of flood irrigation in the agricultural sector and the absence of circular economy solutions for wastewater are leading to sub-optimal utilization of constrained water resources. Wise water management in agriculture will not only benefit farmers, but also the overall development of the state.

The largest and most economically significant river basins in Karnataka – Krishna and Cauvery – already face a water demand-supply deficit. With projected increases in population growth from sixty-one million in 2011 to eighty million by 2030, coupled with increased water requirements for the urban, industrial and agricultural sectors, there is an urgent need for coordinated action across Karnataka’s inhabitants and businesses to better manage their water resources and sustainability. 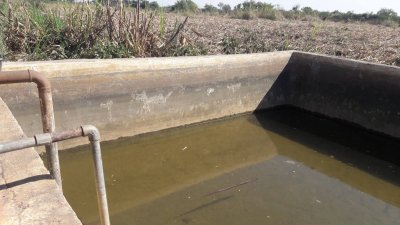 Over the last decade, the state of Karnataka had to contend with concurrent drought conditions in some parts while floods affected others. Even though the capital Bengaluru is a global technology hub, half of the workforce of the state are farmers and agriculture will nevertheless remain a vital sector within the state economy. With 65% of the land area of the state under agriculture and only 35% of that irrigated, wise water management in agriculture will not only be vital for the benefit of the farmers but also for the overall development of the state.

By 2030, the State of Karnataka is likely to double its water demand. In the agriculture and municipal sectors, that demand is expected to rise fourfold in the same time frame, placing added pressure on water resources. This demand will not be met under a business as usual scenario. The Hydro-Economic Analysis conducted by 2030 WRG shows that Karnataka will require twice as much water by 2030 as is consumed today and that a business-as-usual approach will help meet only half of this requirement. By implementing integrated water resources management and increasing investment in infrastructure, the analysis shows that the state could set a vision to become the most progressive agri-water state in India, increase average farmer incomes by 100% and create a surplus of 397 TMC by 2030 to further drive growth throughout the economy.