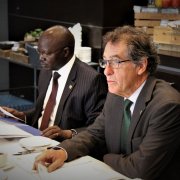 The Kenya 2030 Water Resources Group Governing Board unanimously endorsed two project proposals within the industrial and urban water management workstreams aimed at improving reliable data collection of industrial water-use and addressing the challenge of non-revenue water (NRW), respectively. Following several months of bilateral engagements with stakeholders, the proposals outline fresh approaches to two intractable water management challenges: how to incentivize industries to invest in water conservation and efficiency technologies, and how to reduce national non-revenue water rates of up to 45%.

The economic growth targets laid out in Kenya’s Vision 2030 and President Kenyatta’s “The Big Four” agenda take for granted the long-term dependable availability of adequate and sufficient water resources – but this isn’t a given. Industry’s water demand is estimated to increase by 140% by 2030 amid a growing supply and demand gap that is projected to reach 63% in Nairobi by 2035.

Despite the sobering projections, making the business case for industries to invest in water conservation is a challenge for policymakers. Water is often perceived as cheap and its scarcity risks are not well understood. The challenge is complicated further by the lack of reliable data on industrial water-use. The little data that does exist is scattered among various institutions and not accessible at an aggregated level for decision making.

To overcome this, KIWA, in partnership with the Kenya Association of Manufacturers (KAM), the Water Resource Authority, and the Ministry of Industrialization, proposes to develop a browser-based platform to improve reporting, data collection, and benchmarking of industrial water use. By aggregating water utilization across industrial processes leading up to the discharge, the project aims to create more awareness about companies’ own performance with regards to local and international water-use benchmarks and hence be a driver for efficiency; provide a valuable source of information for planning and regulation authorities and water allocation plans; and deliver a sound foundation for evidence-based decision making and policy formulation.

Despite significant efforts, national NRW levels have stagnated between 42-45% throughout the last 10 years. The high level of physical and commercial water losses costs the country about KES 8 billion annually. Building on the experiences from blended financing and the on-going National Performance-Based Financing (N-PBF) initiative, the urban water management workstream project aims to support utilities in adoption of Performance Based Contracts (PBC) as a new approach to reduce NRW in partnership with private sector.

In a PBC approach, a private company is contracted to carry out a comprehensive program to cut water losses and is paid based on the performance achieved, while the ownership of the system remains in public hands. PBCs have proven to be 68% more effective than in-house NRW reduction programs, and proof-of-concept projects abound in locations ranging from the Bahamas, to Vietnam, to Bangkok, to Brazil.

A new approach with Performance Based Contracts

While PPPs can be applied through the entire water supply value chain ranging from abstraction, treatment and distribution, the PBC approach is being proposed to address NRW for urban water service providers (WSP) in Kenya because of three key reasons: first, reducing NRW offers a “cheaper” way of getting new water supply. Reducing both physical and commercial losses of water already in the distribution network delays the need for developing additional sources by optimizing what’s already treated and made available to consumers in the distribution network. Second, reducing NRW will contribute to the utility’s financial viability by maximizing revenues which support struggling WSPs to eventually climb up the creditworthiness ladder. And third, reducing NRW improves 24/7 reliability in water supply to consumers.

Moreover, PBCs-for-NRW reduction are an effective means of maximizing finance for development by structuring the joint ventures in such a way that the private party finances the NRW reduction investments up-front through own equity or a commercial loan or debt arrangements with local banks. The concept note proposes to identify and support preparation of 3-5 demonstration PBCs for PBC- NRW project design.

The proposals were put before the board during its second bi-annual meeting of 2018, chaired by the Hon. Simon Chelugui and Mr. Richard Fox, Chairman of the Kenya Flower Council and Director Sustainability with Flamingo Horticulture, standing-in for Mr. Vimal Shah. The board approved the projects to proceed according to the plans detailed in the concept notes, and has committed to support the initiatives in mobilizing political champions at national government and county governments levels.