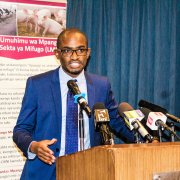 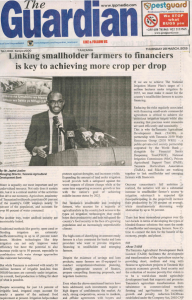 Water is arguably our most important and yet undervalued resource. Not only does it sustain life, but it is a critical enabler of the activities that drive our economy. Agriculture, a mainstay of Tanzanian livelihoods, constitutes 30 percent of the country’s GDP, employs nearly 70 percent of the population, and accounts for over 80 percent of water consumed.

Put another way, water and food security are inextricably linked.

Traditional methods like gravity, open canal or flooding irrigation are extremely inefficient resulting in up to 45 percent water losses. Modern technologies like drip irrigation can not only improve water efficiency but have the potential to also increase yields up to 50 percent, especially in combination with water storage approaches like rainwater harvesting.

But while Tanzania is endowed with nearly 30 million hectares of irrigable land, less than 500,00 hectares are currently under irrigation. As a result, food production is falling far short of what is possible.

Despite accounting for just 1.6 percent of irrigable land, irrigated crops account for nearly a quarter of the national food requirement at present. Irrigation helps reduce reliance on increasingly erratic rainfall, protects against droughts, and increases yields.

Expanding the amount of land under irrigation would provide both a safeguard against the worst impacts of climate change while at the same time supporting economic growth in line with the nation’s goal of achieving middle-income status by 2025.

But Tanzania’s smallholder and emerging farmers, who account for a majority of agriculturalists in the country, lack access to the types of irrigation technologies that could boost their productivity and help safeguard the country’s food security in the face of a growing population and an increasingly unpredictable climate.

The high costs of identifying investment-ready farmers is a key constraint for banks and loan providers who want to provide irrigation financing to smallholder and emerging farmers.

Despite the existence of savings and loan products, many farmers are ill-equipped to conduct comprehensive business planning, identify appropriate sources of finance, prepare compelling financing proposals, and negotiate loan terms.

Even when the above-mentioned barriers have been addressed, such investments require a high degree of confidence in the market. As such, strong cooperatives, access to markets, and offtake agreements with buyers and processors are also needed.

If we are to achieve The National Irrigation Master Plan’s target of 1 million hectares under irrigation by 2035, we must make it easier for the country’s smallholder farmers to access financing.

Reducing the risks regularly associated with financing small-scale commercial agriculture is critical to achieving our ambitious irrigation targets while also ensuring that precious water resources are used efficiently and sustainably.

Once our consortium’s full ambition is realized, the initiative will see a substantial increase in smallholder farmer’s access to irrigation solutions. It is expected that those participating in the project will increase their productivity by 30 percent on average, while simultaneously decreasing water abstraction by up to 50 percent.

There has been tremendous progress over the last decade in terms of developing the types of blended-finance solutions that meet the needs of smallholder and emerging farmers. Now it’s time to connect the dots for the benefit of the economy, people, and planet.

The Tanzania Agricultural Development Bank Limited (TADB) facilitates the development and transformation of the agriculture sector by providing short, medium and long term finance to agriculture projects in Tanzania that promote economic growth, food security and the reduction of income poverty. Our vision is to be a world-class model agriculture development bank that supports and promotes Tanzania’s agriculture transformation from subsistence to commercialized modern farming and agri-business for economic growth and poverty reduction. TADB was established under the Company Act, 2002 CAP 212 in September 2012.

This article was originally published in The Guardian and The Daily News in Tanzania.