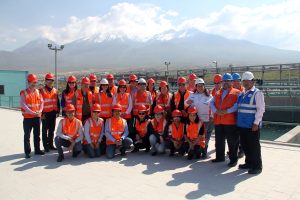 WRG organized a Peru-Mongolia Mining and Water Exchange from 17 to 20 April. Nine Mongolian participants from the Ministry of Environment, the Ministry of Mining, and a few mining companies and NGO representatives traveled to Lima to attend the exchange. They shared experiences with their Peruvian counterparts and went on several field visits.

With 300 operational mines and the mining sector contributing 85% of exports in Mongolia, the exchange provided an opportunity for the Mongolian delegates to share their knowledge on water management in the mining sector as well, with the aim of further developing the sustainability of the sector in both country contexts. 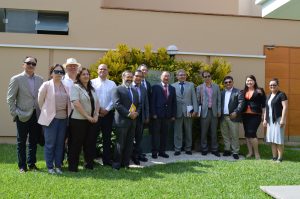 The group traveled to Arequipa to visit the Cerro Verde mine, a very large copper mine located about 20 miles southwest of Arequipa, in southwestern Peru. Cerro Verde represents one of the largest copper reserves in Peru and in the world, having estimated reserves of 4.63 billion tonnes of ore grading 0.4% copper and 113.2 million oz of silver. Peru is the world’s No. 2 copper producer and mining accounts for about 60% of its export earnings. The participants went on a tour to learn more about the company’s water treatment facilities, the water utility they built, operated by water utility Sedapar, and the work with the communities living in Arequipa.

In Lima, the group was greeted by senior officials of the National Water Authority ANA, ProInversion, the National Investment Promotion Office as well as the Peruvian National Society of Energy, Petroleum and Mines. They provided brief presentations and shared their processes and lessons learned. Below are some initiatives that have been developed in collaboration with 2030 WRG in Peru. The participants were interested in learning how some of the programs could be adapted to the Mongolian context. 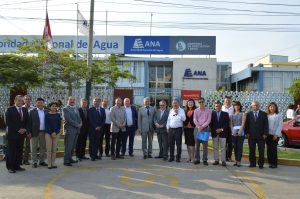 Since 2015, the Peruvian National Water Authority of Peru (ANA), has been encouraging private sector companies to carry out a water footprint measurement and reduction of water use in their processes and operations. This initiative, which closely connects the State and the private sector in their sustainable management of water resources has the support and backing of 2030 WRG in Peru.

2030 WRG and ANA hosted the launch of this initiative on August 9, 2016. This event, attended by more than 40 companies. To date, the companies Mexichem, Duke Energy and Unicom have become part of this program. Other companies that have expressed their interest include Celepsa, Fenix Power and Buenaventura mining.

Works for Taxes (OxI), is an innovative mechanism created in 2009 by the Peruvian Government that allows a company to invest directly in public infrastructure charged against income tax paid annually. In other words, it is a public investment carried out by the private sector in a government program. In the case of water, this instrument allows a company to directly help the State to close gaps in water efficiency.

2030 WRG works jointly with the Ministry of Housing, Construction and Sanitation to encourage the private sector to participate in this mechanism and, at the same time, to identify the restraints and difficulties of the mechanism itself and to make this into a speedier and a more efficient procedure. To this end, acceleration consultants have been hired to work at each of the ministries in this task and to identify the best investment opportunities.

The OxI mechanism is considered an innovative practice because of the way in which it connects the State and the private sector, creating interest from other neighboring countries with regard to its development and implementation.

The efforts of 2030 WRG have allowed large private-sector companies such as Backus (beverages) – Ferreyros (construction), Minsur and Antamina (mining) to already be involved in Works for Taxes processes, generating water-based infrastructure works with tangible and beneficial results for communities in the areas in which they operate.

The exchange is the second in a series of cross-country learning experiences. A previous exchange was held in February, 2016, in South Africa. Participants said it was a great opportunity to gain practical insights from South Africa’s water management experience.

Through presentations, discussions, and field visits, the event provided participants with practical insights from South Africa’s water management and public-private-civil society experience; provided an opportunity for partners from across 2030 WRG countries to network and learn from each other; and enabled South African stakeholders, as hosts, to showcase the country’s water management achievements to senior officials from other countries.

During the wrap-up session, country teams identified the actions they planned to take, based on lessons learned during the knowledge exchange, and areas of interest. The three most commonly identified areas of work among participants were: