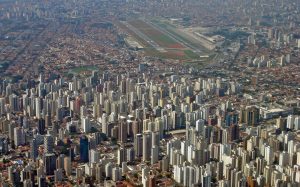 Sao Paulo, July 2017 – An agreement was signed with the São Paulo Secretariat of Water Resources and Sanitation, laying the foundation for a comprehensive program of joint action. Also since July 2017, a 2030 WRG Representative is based in Sao Paulo in order to set-up and lead the program.

Since then, the 2030 Water Resources Group has been developing intense activities in two large macro themes that have been chosen as significant to advance the water security goals in the State. These are: (1) the reuse of effluents from Domestic Sewage Treatment Stations and (2) the poor performance of sanitation services in small and medium-sized municipalities (of less than 300,000 inhabitants).

Four Working Groups are being established to foster dialogue and transparency in seeking good solutions for those issues. Three of these Working Groups are already well-established and a fourth one is being organized with the participation of key decision-makers and with very clearly defined objectives:

As these groups begin their work,  2030 WRG also continues to reach out to local stakeholders to present our activities and dynamics. The reception so far has been very good, and at each meeting we realize that our presence and performance can be significant to support changes towards greater security in the water sector.