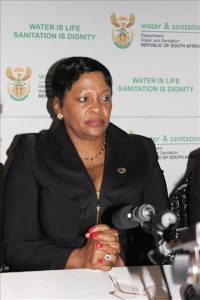 Minister Mokonyane emphasised that water management should be driven by national objectives such as job creation, eliminating inequality and reducing poverty. The Minister offered her full support to the SWPN, emphasising that the partnership has the value of being a two-way sounding board that both the DWS and the corporate sector should use to improve the country’s water management.

The SWPN was launched in late November 2011 by the former Minister with the help of the World Economic Forum and the 2030 Water Resources Group. Since then it has transformed itself from an engagement forum of a small leading group of pathfinders to a robust functional multi-stakeholder partnership that is inspiring other sectors, other countries and starting to achieve significant results on the ground.

In his presentation of SWPN projects, Andre Fourie, Co-Chair of the SWPN and Head of Environmental Value at SABMiller, said that the rallying point of this public-private-civil society partnership was to develop and to bring to scale projects that would close a 17% national gap between water supply and demand that is projected for the year 2030. Mr Fourie added that driven by this goal, the SWPN is a collaborative space where the public and private sector work together to develop solutions to address current water management challenges. He further acknowledged that the success of this partnership is owed to continued political leadership from the department.

Ravi Pillay of Nestle talked about the No Drop programme that was developed by the SWPN and is now being implemented by the Department of Water and Sanitation. The programme has developed a regulatory and partnership strategy, as well as tools to incentivise a reduction in water losses (leaks, meter problems and theft) in municipalities from the current 32% to 18% by 2025. This result will save the country over R2.5 billion in annual revenue that would otherwise have been lost from municipal water systems.

On the issue of water quality challenges related to mine impacted waters, Nandha Govender from Eskom spoke about how the SWPN is providing guidance on planning for mining and water management at wider scales beyond individual mine facilities.

In the area of agricultural water, Ian Hirschfeld of Coca-Cola said that the SWPN is developing a business case to enhance private sector investment in the rehabilitation of the Vaalharts irrigation scheme, the largest in South Africa. The project has the dual objective of improving productivity and water access to new farmers.

The work was appreciated by the new DWS Director-General (DG), Ms Margaret-Ann Diedricks. The DG also recommended that the partnership, in addition to municipal water reduction, looks at industrial water use efficiency as well. She then committed that the Department will assign relevant senior members to be involved to ensure continued success of this partnership.

Minister Mokonyane concluded that she saw great potential in the SWPN, saying that an open, long lasting and robust relationship between the private sector and the department including its entities is essential for addressing water security and national development goals. She provided some guidance to the SWPN leadership with regard to additional issues that include addressing sanitation, direct interaction with community groups, and the role of the private sector in financing infrastructure.