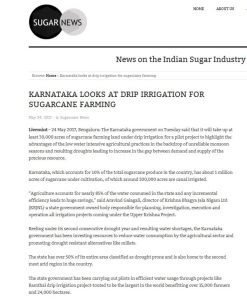 Livemint – 24 May 2017, Bengaluru: The Karnataka government on Tuesday said that it will take up at least 30,000 acres of sugarcane farming land under drip irrigation for a pilot project to highlight the advantages of the low water intensive agricultural practices in the backdrop of unreliable monsoon seasons and resulting droughts leading to increase in the gap between demand and supply of the precious resource.

Karnataka, which accounts for 10% of the total sugarcane produce in the country, has about 1 million acres of sugarcane under cultivation, of which around 300,000 acres are canal irrigated.

Reeling under its second consecutive drought year and resulting water shortages, the Karnataka government has been investing resources to reduce water consumption by the agricultural sector and promoting drought resistant alternatives like millets.

The state has over 50% of its entire area classified as drought prone and is also home to the second most arid region in the country.

The state government has been carrying out pilots in efficient water usage through projects like Ramthal drip irrigation project-touted to be the largest in the world benefitting over 15,000 farmers and 24,000 hectares.

Announcing the launch of a multi stakeholder platform between the state government and Water Resources Group 2030 on Tuesday, experts said that the rapidly growing population will see the urban water demand-supply grow from 24% in 2011 to 58% in 2030 if more efficient agricultural practices are not adopted at the earliest.

“Protecting the world’s water resources is a shared responsibility. Our work is based on collaboration among governments, financial institutions, non-governmental organisations, civil society agencies, and companies to close the gap between water demand and supply by the year 2030,” said Bastiaan Mohrmann, co-lead Asia and Middle East for 2030WRG, an advisory group that is trying to bring public-private-civil society collaboration on sustainable uses of water.

The pilot project, expected to commence around October, will cost around Rs 1.25 lakh per acre. Galagali said that KBJNL and other agencies have recommended that Rs 85,000 for infrastructure like pumps and pipes be borne by the government and Rs 40,000 by the farmer.

He added that the government has spoken to sugarcane farmers, sugar manufacturing companies and banks on the issue to help fund the farmers share of the contribution. Galagali said that sugar manufacturers have agreed to partially guarantee the loans availed by farmers for the proposed project.

B.G. Gurupadaswamy, secretary to Karnataka’s water resources department, said that they had to show the benefits of drip irrigation to farmers for the community-over 75 lakh in the state-to adopt these practices. He said that drip irrigation in sugarcane has been proven to increase the yield by 25-30%, translate into higher returns and result in higher water savings for the state.

Mohrmann added that the platform is also promoting drip-to-market agri corridor cluster concept where drip irrigation infrastructure will be connected to sustainable offtake in partnership with buyers for the produce.