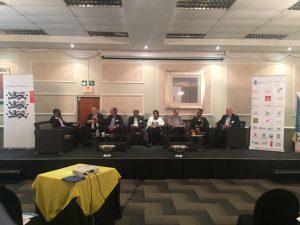 Johannesburg, October 12 2017 – Leading water, infrastructure and financial sector stakeholders met in Johannesburg for in-depth talks on funding models to improve South Africa’s water security. The third Annual Water Stewardship summit, kicked off with calls for the financial sector to look introspectively at ways to support efforts to close the water services infrastructure funding gap amounting to around US$ 2.3 billion per annum; in support of the coming National Water and Sanitation Master Plan.

The South Africa Department of Water and Sanitation is currently in the process of drafting the country’s new National Water and Sanitation Master Plan, with expected completion in March 2018.  The summit, organized by the Strategic Water Partners Network, the National Business Initiative and the Royal Danish Embassy, provided an often-neglected opportunity for public and private financiers to become involved in the initial planning and project conceptualization stage of the new National Water and Sanitation Master Plan. By involving such financiers early in the process, it is hoped that the master plan’s investment strategy would be designed in a way which is as beneficial to the country as it is attractive to investment.

Outlining the goals of the plan, Trevor Balzer, Deputy Director General: Strategic and Emergency projects at the Department of Water Sanitation, echoed sentiments made earlier this year by his Deputy Minister, Pamela Tshwete, who, at the first dialogue on the Water and Sanitation Master Plan on 19 May this year, called upon big businesses to assist in funding sustainable development projects. Balzer said: “Today’s event has brought us together at a critical time in South Africa’s water and sanitation planning. We expect to incorporate the feedback we received today from the financial community and other stakeholders to create a plan that effectively addresses the country’s needs.”

Catherine-Candice Koffman, Head of Infrastructure and Telecommunications Project Finance within Corporate and Investment Banking (CIB) one of the “big four” banks in South Africa – Nedbank, stated, “Getting involved at this stage of the planning process helps us from a corporate and investment banking perspective to better conceptualise how we can leverage our strategic, operational and sustainability goals to proceed in a way which will contribute to the future master plan. At Nedbank CIB we understand the intimate connectivity between leveraging natural resources and converting these into viable economic solutions to ensure the sustainability of our business and the socio-economic ecosystem in which we co-exist.”

One key recommendation, among a few others, for the Master Plan was that because Non-Revenue Water losses amount to about US$ 500 million annually, this was an area to consider a central government led programme that could make use of public and private investment to reduce municipal water and revenue losses. The SWPN is already testing some concepts of how this could be done.