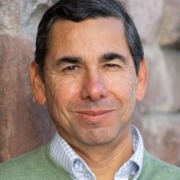 Darío Soto-Abril is the Executive Secretary and Chief Executive Officer (CEO) of the Global Water Partnership, a global action network focused on the sustainable management of water resources.

Soto-Abril took up his role in March 2021, his appointment coincided with GWP’s 25th anniversary year. This is something he wants everyone in the network to be proud of, and he wants to use the strong foundation to build the future:

“My vision is that we become the most prominent water voice in the world. I want everybody to acknowledge our role. I want them to see that we influence policymakers and policy discussions at the global, regional, and national levels. I want people to see GWP in action, for them to be able to point to a project, a policy, or a law that was passed because of us. They should feel tangible change in their lives because of us.”

In his previous position as Global CEO at Fairtrade International, Soto-Abril led a process of transformation that resulted in a greater focus on impact priorities, delivering positive change for more than 5 million people in agricultural communities around the globe.

Soto-Abril spent the first part of his career as a corporate lawyer before moving to The Trust for the Americas, the non-profit affiliate of the Organization of American States (OAS) where he spent 14 years as the Deputy Executive Director/Chief Operating Officer. During his time at The Trust/OAS, he led the expansion from three to 22 countries in Latin America and the Caribbean, building coalitions and public-private partnerships around free trade, workers’ rights, and human rights.

Soto-Abril, a Colombian, has a Law degree from Universidad Javeriana (Colombia), a Masters of Law from Tulane University (New Orleans), and a Masters in Public Administration from the John F. Kennedy School of Government at Harvard University.