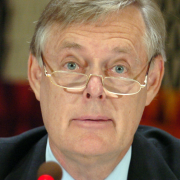 At 68 years of age, Lennart Båge has had a long career in Swedish diplomacy. Originally trained as an economist, he was on Sida’s board of directors from 2010 to 2015. In the 1980’s Lennart Båge was the director of SAREC (today the Department for Research Cooperation within Sida). In the 1990s he was ambassador and head of the multilateral department at the Ministry for Foreign Affairs. In the 2000s, he was director of the International Fund for Agricultural Development, IFAD. Today Lennart Båge is the chairman of the think tank Global Utmaning (Global Challenge).