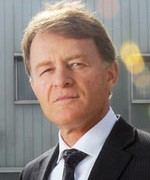 After being admitted to the Arizona State Bar, Manuel Sager worked for two years in a law firm in Phoenix, Arizona. In 1988, he joined the Federal Department of Foreign Affairs’ (FDFA) diplomatic service. After posts as a diplomat-in-training in Bern and Athens, Mr. Sager worked from 1990 to 1995 as a diplomatic desk officer at the Directorate of International Law. From 1995 to 1999, he was the Swiss deputy consul-general in New York, and from 1999 to 2001, he was in charge of communications at the Swiss embassy in Washington.

From 2001 to 2002, Mr. Sager was head of the International Humanitarian Law Coordination Office within the Directorate of International Law, and then head of FDFA Information. From 2003, he was head of information at the Federal Department of Economic Affairs.

From 2005 to 2008, Mr. Sager worked as an executive director of the European Bank for Reconstruction and Development in London with the title of ambassador. From 2008 to 2010, he was head of the FDFA’s Sectoral Foreign Policies Division.

From 2010 to August 2014, Mr. Sager was the Swiss ambassador to the United States. After a two-month visiting professorship at Duke University Law School, on 1 November 2014, he assumed the post of director-general of the Swiss Agency for Development and Cooperation within the FDFA.