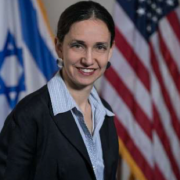 Minister for Economic and Trade Affairs, Embassy of Israel in Washington, DC

Yifat Alon-Perel is the Minister for Economic and Trade Affairs at the Embassy of Israel in Washington, DC, heading Israel’s trade policy vis-à-vis the United States.

In her role, Yifat oversees the Trade and Economic Mission, aims to promote and facilitate trade and investment between Israel and the United States, and to enhance bilateral commercial relations. For this purpose, Mrs. Alon-Perel works closely with the U.S. federal government agencies, as well as the private sector. In addition, Yifat oversees Israel’s engagement with international financial institutions, i.e. the World Bank and the Inter-American Development Bank.

Prior to this post, Yifat was the Director of the Bilateral Trade Agreements Division at the Israeli Ministry of Economy and Industry, negotiating free trade agreements. Mrs. Alon-Perel previously served as the commercial attaché at the Embassy of Israel in Madrid, Spain.

Mrs. Alon-Perel earned a MA in Economics and a BA degree in PPE (Philosophy, Political Sciences, and Economics), both from the Hebrew University in Jerusalem.

Yifat speaks Hebrew, Spanish, and English. She is married to Shlomo, a software engineer, and is a mother of three children.