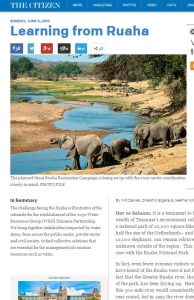 The challenge facing the Ruaha is illustrative of the rationale for the establishment of the 2030 Water Resources Group (2030 WRG) Tanzania Partnership. We bring together stakeholders impacted by water stress, from across the public sector, private sector, and civil society, to find collective solutions that are essential for the management of common resources such as water.

Dar es Salaam. It is a testament of the wealth of Tanzania’s environment riches that a national park of 20,000 square kilometers – half the size of the Netherlands – and home to 10,000 elephants, can remain relatively unknown outside of the region. This is the case with the Ruaha National Park.

In fact, even fewer overseas visitors would have heard of the Ruaha were it not for the fact that the Greater Ruaha river, the livelihood of the park, has been drying up. Historically, this 300-mile river would consistently flow year round, but in 1993 the river dried up for the first time for three weeks. By 1999 this had reached three months, and by 2013 dry spells were even being reported even during the wet season.

Read the rest of the article >>