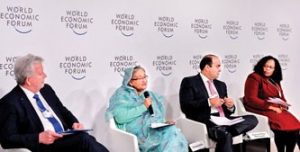 “The contribution of apparel and textile industry to our economy is immense. We are highly committed to ensure compliance with regard to labour rights, workplace safety and environmental standard in the industry,” she said. The premier also said Bangladesh’s readymade garment sector achieved higher compliance standards in terms of wages, workplace safety, norms, practices and harmonious industrial relations. “There has been a 77% increase in basic wage. Assessment of all the 3780 factories as recommended by global brands and retailers has been completed,” she said.

The Prime Minister was replying to questions at the workshop on “Shaping a New Water Economy” in the 47th Annual Meeting of the World Economic Forum at Congress Centre here. President and CEO of World Research Institute Andrew Steer moderated the workshop attended by heads of state and government of different countries participating in the WEF. Sheikh Hasina said Bangladesh is the second largest apparel and textile exporting country in the world. “The sector employs 4.5 million workers, of which 80 per cent are women. The industry accounts for 83% of our total exports,” she said. The premier said the factories were now working hand-in-hand with global brands and retailers to ensure international standards. Every factory had an Occupational Safety Committee where employers and workers were working together, she said.

“We are supporting the industry to ‘go green’. Today, Bangladesh has LEED certified 38 factories. Out of the world’s top 10 ranked green factories, 7 are in Bangladesh.” The Prime Minister said since 2015, Bangladesh Government had been working with 2030 Water Resources Group (WRG), more specifically, to achieve 100% wastewater treatment and increase water use efficiency as per international benchmarks in the apparel sector. She said, “Our work with 2030 WRG” is focusing on the following areas:

As a member of the High-Level Panel on Water, she said, she was committed to innovating frameworks like 2030 WRG.

UNB adds, earlier the Prime Minister along with other global leaders gathered here on Tuesday as the 47th Annual Meeting of the World Economic Forum (WEF) began.

The four-day meeting began at Congress Centre in Davos, a mountain resort at Graubünden in the eastern Alps region of Switzerland, under the theme ‘Responsive and Responsible Leadership’. On the sidelines of the forum, Sheikh Hasina had also informal interaction with Chinese President Xi Jinping and Swiss President Doris Leuthard. The Chinese President, who was accompanied by the largest delegation of his country since its first participation in an annual meeting in 1979, opened the meeting proceedings. In his speech, the Chinese President said economic globalisation powered worldwide growth and it should not be blamed for the world’s problems. In an attack on the anti-globalisation rhetoric that has led to the election of Donald Trump as the US President and the Brexit vote in the UK, he told a packed audience: “It’s true that economic globalisation created new problems but there’s no justification to write off economic globalisation altogether. Rather we should adapt to and guide economic globalisation, cushion its negative impacts and deliver its benefits for all countries.”