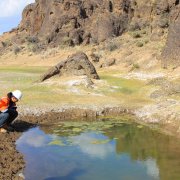 Mongolia’s water challenge is somewhat unique. Looking only at national-level data about Mongolia’s water supply and demand, it is easy to conclude that Mongolia has enough water to support its population and industries. But such high-level data belie the concrete water challenges that are felt by its people and industries at the local level; Mongolia’s population and industries are clustered in the capital city and the Gobi mining region and both groups struggle to get the water they need.

To better manage Mongolia’s precious resources, the Parliament of Mongolia passed the Water Law of 2012, which serves as an umbrella law for integrated water resources. Together with other complementing laws, such as the Law on Water Pollution Fees (2012) and the Law on Use of Water Supply and Sewage System in Urban and Settlement Areas (2011), the Water Law provides the legal basis for charging consumers for the use of water, discharge of wastewater and collecting penalties for exploitation and violation of rules.

While the economic instruments, such as water service charges, water usage fees and wastewater charges, were introduced with the Water Law (2012), the existing design does not provide any incentives for either the sustainable use of water resources by industries or investing in new technologies to increase treat industrial wastewater.

When the Government of Mongolia approached 2030 WRG for its support, 2030 WRG took a different approach. Instead of addressing each problem separately, 2030 WRG adopted a macro perspective, and brought people who are being impacted by issues with those who can help bring change to sit at the same table. 2030 WRG’s Mongolia team designed an inclusive stakeholder process to develop a new water pollution tariff model that incorporates Polluter Pays principles to support fee collection that is linked to volume and load of wastewater discharge and is easy to implement. In addition, it is currently supporting a new urban water tariff structure to drive greater water use efficiency and wastewater treatment and reuse.

Mongolia 2030 WRG went beyond a narrow focus on existing bottlenecks in policy implementation and enforcement and looked for opportunities to crowd in the private sector at a large scale. In partnership with IFC, it brought Mongolia’s mining companies into the dialogue, as their operations represent a huge part of the country’s export revenues, and the mining industry has traditionally suffered tensions with communities around the sustainable use of water resources. 2030 WRG also supported reform in water governance by bringing all relevant actors at the river basin level to collectively discuss and decide water resources planning and implementation, thereby promoting transparency and dialogue to resolve contentious water issues.

Such a holistic and inclusive approach to water resources management has never been tried in Mongolia. To recognize 2030 WRG’s valuable contribution, the Mongolian government granted a high-level ministerial award to 2030 WRG on December 26, 2018.

This award not only marks an important milestone in 2030 WRG’s partnership with the Government of Mongolia, it also promises continued collaboration for wider impact on Mongolia’s water security going forward. “As public servants we have a responsibility to make sure our citizens and businesses have the water they need. But ensuring water security in Mongolia is a complex task that the government alone cannot complete,” said Mr. Tserenbat, Minister of Environment and Tourism, Cabinet member of Mongolia. “With 2030 WRG’s help, we have taken the first step to bring everyone together so that we can all see the bigger picture. The results so far have been promising, and we look forward to taking our collaboration to the next level.”