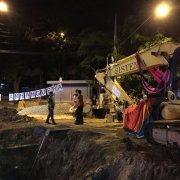 In metropolitan areas of Brazil, inadequate coverage of sewage collection and treatment infrastructures is the biggest cause for the widespread pollution of urban rivers, streams, and lakes. Many of the watercourses that cut through urban areas eventually turn into sewage channels that run on the surface or under the ground. Besides that, due to inadequate public services and a general lack of awareness among the population about proper waste disposal, river channels and rainwater pipes have also become receptacles for all kinds of solid waste. Polluted and smelly, urban watercourses and riverbanks have become abandoned spaces that are closed off to the public.

When it comes to urban water drainage, policies in Brazil have historically been focused on the channeling of rivers and streams to combat floods or reclaim land for urban expansion. Urban watercourses have been seen as elements that must either be tamed or exploited for urban development. But it is possible to adopt an alternative perspective—urban rivers as elements that could be used to enhance environmental quality, urban landscape, and quality of life, as well as public awareness on environmental and water and sanitation issues.

Although such a perspective is slowing gaining recognition, public institutions responsible for managing cities are still deeply entrenched in a culture that is characterized by sector-segmented visions, objectives, and funds that favor existing engineering solutions and immediate pragmatism. Urban design and environmental sanitation are but afterthoughts.  If public institutions were to rethink their priorities and funding for urban water drainage and redesign institutional responsibilities, urban rivers and streams that are currently degraded could actually become healthy and attractive public open spaces.

Working off this idea, Brazil 2030 WRG began to champion the revitalization of the Anhanguera creek, which runs through underground drainage pipes in downtown São Paulo and has relatively good water quality. These drainage pipes are also old and damaged and are no longer able to support increased storm water flows, leading to frequent flooding in the area. To revitalize the creek and its surrounding area, Brazil 2030 WRG’s proposal calls for the cleanup of a portion of the creek’s water so that it could flow above ground and become part of the urban landscape.

Accordingly, Brazil 2030 WRG set up a working group to discuss the project and mobilize the first set of stakeholders, including: (i) Companhia de Saneamento Básico do Estado de São Paulo (SABESP), which is the state sanitation company that is responsible for sewage collection and treatment in the city of São Paulo; (ii) the City Government, which is responsible for urban planning and the management of drainage systems and solid waste collection and disposal; and (iii) representatives of the surrounding communities, including residents, architects that work on the neighborhood, and users of a public square and a public library. Further down the line, the working group plans to engage with surrounding commercial establishments and encourage them to handle their solid waste in a more responsible manner. Because there are many homeless people in the proposed urban intervention area, the working group also plans to discuss ways to meet their basic sanitation needs.

The working group has discussed the fundamental topics for the revitalization project, including the integration of drainage, sewage collection and solid waste management; the use of water above ground as an urban asset; and the early participation of the community. Currently, we are seeking financial support for the project. If successful, this initiative could help change prevailing views of urban watercourses in São Paulo and serve as an example for other Brazilian cities.