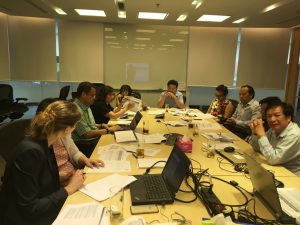 Vietnam Advisory Board Meeting and the launch of the report: “Vietnam: Hydro-Economic Framework for Assessing Water Sector Challenges”.

Building on multi-stakeholder engagement, the report analyzed the water sector challenges in Vietnam by assessing the water demand-supply gap and water stress of Vietnam’s four key river basins. It then performed a high-level cost curve analysis to recommend cost-effective solutions to address these challenges. Deep dives were undertaken for four solutions, which were identified by the analysis and from stakeholder consultations to have the largest potential to address Vietnam’s identified water resource challenges.

Vietnam’s economic growth and social transformation over the past decades has been impressive and has lifted large portions of the society out of poverty. Striving for economic growth, however, has put pressure on sustainable resource use and environmental protection. In 2016, MONRE’s Minister Tran Hong Ha, stated that ‘along with the process of economic development, the environment has reached the threshold of tolerance’.

Further, over-exploitation of Vietnam’s unmonitored groundwater resources, is already resulting in declining groundwater levels and localized water shortages in the dry season, saline intrusion in Vietnam’s most productive agricultural areas and land subsidence in it’s most important cities, namely Hanoi, Ho Chi Minh City and Da Nang. With only 10% of the municipal and industrial wastewater treated, Vietnam’s surface waters, especially around urban and industrial centers, face serious pollution issues, which worsens groundwater over-abstraction and poses serious public health issues.  Climate change is expected to worsen Vietnam’s situation, with the recent El Nino event between 2014 and 2016, which caused the most severe drought Vietnam experienced in 90 years, providing a first impression for what Vietnam may has to prepare for.

Taking this very seriously, Members from the Government, Donors, Water User Associations, Research Institutions, NGOs, and Private Sector representatives engaged in an active and constructive discussion on the report findings as well as what actions are required for Vietnam. The discussions went beyond the deep dives presented in the study to include topics around incentives and regulatory reforms, river basin management, and policy incentives for private sector engagement.

It was agreed that an expansion of AWD for rice production has great potential and is of interest to Vietnam, however, guidance is required on how to do this. Further, coffee was identified as a priority crop for action, besides rice. The creation of incentives for sustainable water resource management was seen as crucial. For this, the participants saw potential in supporting the government in drafting decrees, circulars and decisions on guiding the implementation of the new irrigation law. Further, the potential of market-based instruments to create incentives was discussed. On wastewater treatment and reuse, guidance on drafting regulations and standards was seen as required to leverage the large scope of the currently unused and untreated wastewater. Focused and industry-specific assessments are required to implement industrial wastewater treatment – going beyond the policy and regulatory aspects. Support in developing the vision, mission and institutional arrangements of river basin councils was seen as critical and timely, as MONRE has just decided to aggregate all river basins to six overall units. Further, improvements in access to finance, e.g. PPP or green finance, were discussed to be relevant for water sector transformation.

A representative from Esquel, a textile high-end brand said industries would not only be interested in quantitative analysis but also qualitative assessment of water uses and their impacts. Within their own sub-sectors, private companies can initiate technical working groups and be ready to engage in multi-stakeholder platform. Communications and public awareness raising on effective water resources management are not to be neglected, a comment made by a participant from the Vietnam Water Supply Association.

The active stakeholder discussions will be continued to further define potential 2030 WRG work streams. Within the coming 3 months a broader national consultation workshop will be held in cooperation with the World Bank, which will present its upcoming and complementary report on Water Governance in Vietnam.