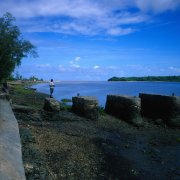 A water inventory exercise carried out by the Kilimanjaro Water Stewardship Platform (KWSP) in the Usa-River sub-catchment within the Pangani Basin—one of Tanzania’s most agriculturally productive areas and an important hydropower production region, yielded shocking results. Through this exercise, a Catchment Stewardship platform established by Tanzania 2030 WRG, discovered that 62 percent of water abstractions in the area were illegal. Furthermore, 10 percent of water users there held expired permits, and 52 percent lacked any permit whatsoever. Meanwhile, only 58 percent of registered users paid their dues.

With such meager income, it is difficult for Basin Water Boards (BWB), the Water Resources Management Authority responsible for enforcement of water resources management regulation and ensuring effective stakeholder collaboration and engagement, to carry out its mandated activities, including maintaining a registry of water users and reviewing water permits every five years. Its inability to perform such key functions directly undermines its means to secure much-needed income, and traps it in a vicious cycle.

This inventory exercise—which was jointly carried out by the Pangani BWB in collaboration with the International Water Stewardship Program (IWaSP) and the local Water Users Association under the Catchment Management and Restoration Workgroup of the KWSP—was a much-needed first step to help BWB work its way out of that vicious cycle. Not only did the exercise uncover important insights about BWB’s users, it also gave BWB a valuable tool to raise awareness among water users about their responsibility to BWB. Specifically, the exercise gave BWB the opportunity to educate many users who were found to be abstracting water without a permit about the new act requiring all users to register with BWB.

Moving forward, BWB plans to use the funds collected to expand the exercise beyond the Usa-River sub-catchment, which is only one of the many tributaries of the Kikuletwa River Catchment within the operation area of KWSP.