A study by the United Nations’ Food and Agriculture Organization (FAO) reveals that women could improve agricultural yields by 20-30 percent if given access to the same productive resources, such as modern inputs, technology, financial services, and training, that are available to men. In the Amravati district of Maharashtra, 1,900 women from two talukas (administrative divisions of a district) are gradually transforming the agricultural landscape by improving agricultural production and post-harvest processing. Several of the women I recently met in Amravati had interesting stories to share.

Through Mahila Arthik Vikas Mahamandal (MAVIM), a government-funded program, women across Maharashtra, including the Amravati district, were encouraged to form Self Help Groups (SHGs) where they could be trained to cultivate a habit of saving and receive access to group credit through bank linkages. In such a way, several women in the district were able to secure loans for their family farms and personal use. MAVIM further encouraged these women to form consortia of SHGs at the taluka level that could support capacity building in areas such as social and leadership skills. As a result, women found the confidence to venture out of their homes, consider possibilities to start their own businesses, and apply for bank loans. The United Nationals Development Programme (UNDP), with the goal of empowering women through Project Disha, trained women in the SHG consortium of two talukas in the Amravati district on post-harvest management, which led to increased income opportunities for them. Through diverse partnerships and support from the private sector which procured produce from these women farmers, these women became knowledgeable about potential business opportunities for them in the agricultural value chain.

One of the woman farmers who started their own businesses is Rekha Sarodayay. Rekha is a sourcing manager for one of the SHG consortia from the Wakiraipur village of Amravati. She oversees the sourcing of pigeon peas from three villages, dealing primarily with men; traditionally, such interactions are restricted. In addition to her work as a sourcing manager, Rekha also trains women from the villages in best practices for post-harvest management. Drawing upon the training she has received through various programs, Rekha formed her own small enterprise of making wheat noodles three years ago. Along the way, Rekha had to overcome many difficulties, including getting access to finance to buy the machine she needs to make noodles. She borrowed Rs.25000 (US$370) from her SHG at an annual interest rate of 24 percent and invested her savings to start her business. With access to productive resources, Rekha built a thriving business in less than two years and was able to return the funds she borrowed while contributing to the household income. Today, there are over 150 small businesses owned by women like Rekha in the two talukas. These women, who manage complex households while pursuing multiple livelihood options, continue to inspire confidence in other women of the district.

In support of women farmers like Rekha, Reema Sathe left her comfortable corporate job to build a women-friendly supply chain, offering new markets to 15,000 women smallholder farmers. Her team supports a women-run cooperative factory by training them to make baking products using less water-intensive grains like barley, buckwheat, and oats. Through her online platform, Happy Roots, these women were able to sell directly to consumers, thereby eliminating the costs that comes with using middlemen. 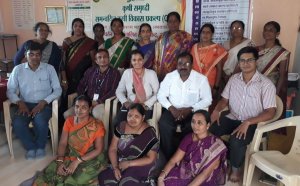 Women entrepreneurs like Rekha and Reema, are leading some of the most exciting agri-innovations on the ground, and they are a source of inspiration for those who are passionate about empowering women in rural areas. Today, organizations are keen to invest in women with the aim to close to gender gap, improve rural livelihoods and income, and make rural families and communities more food secure. To highlight such examples, 2030 WRG worked with UNDP India on a compendium of case studies from Maharashtra that exemplify women-centric partnership models that have positively impacted agricultural value chains and have the potential to scale. By challenging gender stereotypes, these case studies could catalyze transformative change in the role of women in Maharashtra and beyond.

The publication, ‘Gender and Water in Agriculture and Allied Sectors’ was jointly developed by 2030 WRG and UNDP India and was launched on 26 February 2019. Read or download the publication here.